Python has been reigning amongst the top programming languages around the globe. It has proven to be a winning formula for software quality, efficiency, and maintainability at many organizations, worldwide. It is one of the fastest-growing programming languages embedded with vast libraries and frameworks to fasten results. It has been acting as a catalyst in implementing cutting-edge technologies like AI and ML. 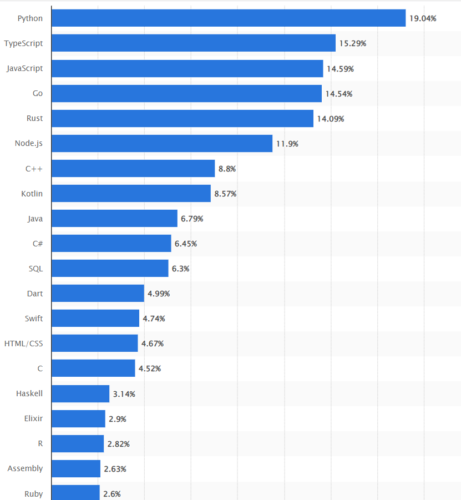 Courtesy: Most wanted programming languages among developers worldwide, as of 2021

With Python being so popular, there are many Python frameworks that are well-known. These frameworks are known to make the entire development approach simpler and quicker by offering a bunch of modules and packages that empower programmers in writing web apps and services. A Python framework could be divided into 3 major categories – full-stack framework, microframework and asynchronous framework.

Before we plunge into the pool of Python frameworks, let us understand the basic concepts of Python as a language.

Python is a high-level, general-purpose programming language. Its design philosophy emphasizes code readability with the use of significant indentation. – Wikipedia

Python is a popular and modern-day programming language that assists developers in working quickly and integrating systems with efficiency. It is used to create software applications and websites, for automation of tasks and carrying out data analysis. It is object oriented and high-level scripting language that is highly readable. There are fewer syntactical constructions as compared to other languages. It is ideal for creating dynamic web applications, data science applications, AI and ML based projects and modern-day digital products. 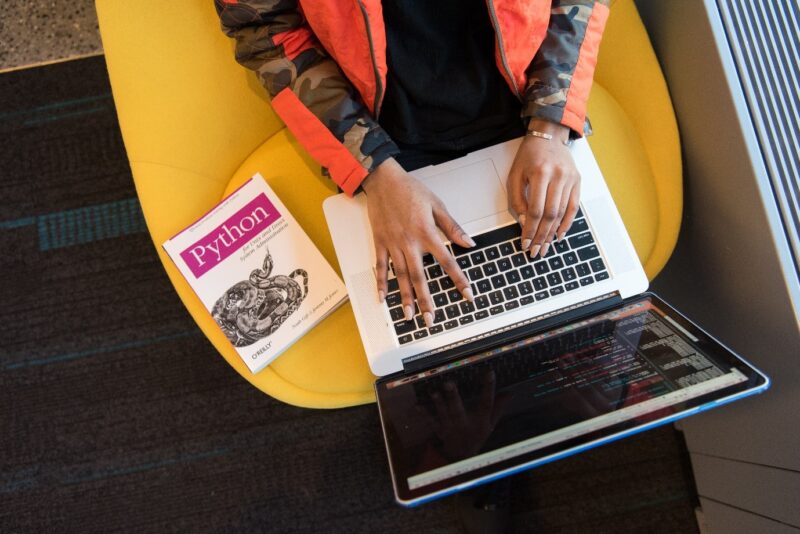 Python is being leveraged by leading organisations worldwide – Google, Netflix, Dropbox, eBay, Spotify, Facebook, Amazon, Quora, Slack, Instagram, Reddit, PayPal, Stripe to name a few. It is considered ideal for working professionals to develop software development skills since it is interpreted, interactive, object oriented and a novice’s language. There is heavy support for functional and structured programming with OOPS. It can be leveraged as a scripting language or compilation can be done to create large applications.

Django is one of the most popular Python-based frameworks that is meant for website development and large-scale, complex applications. It supports fast development and a practical design. It removes the requirement of rewriting the code several times and hence supports rapid development. It possesses a MVC architecture that encourages developers to handle the business logic and visual presentation differently.

With this framework, you can create robust apps in a quick manner with least knowhow of databases or web servers. It supports a range of web development libraries for increasing the reusability of app components. Mapping objects directly to database tables is easy through ORM. With this framework, it is easy for Python developers to create web applications be it a small-scale project or a complex website.

As a micro web framework written in Python, Flask is a popular Python framework suitable for small applications to complicated apps. It is light weighted, enriched with features and a rapidly growing community support. It empowers users to create their own modules and add extensions as required. It has a modular frontend design and routing/plugging through ORM that makes it quite flexible and adaptable.

Its simplicity, swiftness and minimal effort makes it easy for developers to develop efficient and fast apps. It is considered an ideal framework for creating functional apps. It is Unicode-based, ideal for Google App Engine, has effective HTTP request handling. Flask can plug into any ORM with ease and efficiency. As a small Python framework, it offers useful features that can make web app creation easier and accessible.

Dash is a well-known Python framework that is utilized for creating analytical web applications. There is a strong library support that makes the entire process of development of data-driven applications much easier and simplified, especially for novices. It is an open-source framework that works well with other frameworks and helps in creation of interactive dashboards without having to bother about routes and backend code.

Dash offers a range of database customization facilities to create Python dashboards quickly and easily. It is meant mainly to create analytical applications. It can host thousands of web applications and serve millions of requests in a day. It has a modular approach that lets developers choose the components that they need while setting up and leave out those that are not important.

Bottle is a fast, WSGI micro web framework for Python that is apt for rapid development and smaller web apps. It is distributed as a single file module and is light weighted, simple, and effective. It depends upon the Python Standard Library and nothing else. It implements all in a single source file with least tools like templating, routing etc. It is perfect for those who have the basic knowledge of Python.

Bottle is of most use for those who want to create simple apps with increased flexibility. It has an integrated template engine with dynamic URL routes and mapping. Since it has similar features to Flask, shifting between the two is comparatively easy. It needs minimalistic knowhow of programming and can be easily used for fast prototype creation or landing page creation.

CherryPy is a known, minimalist, object-oriented Python framework that’s works well with any OS and has its own independent inserted multi-threaded web server. It wraps the HTTP protocol into different APIs, helps developers create web applications in a rapid manner and remains at a low level. It empowers any kind of technology for availing data and other activities.

CherryPy offers the Create, Retrieve, Update and Delete (CRUD) functionalities for all applications and assists in monitoring projects from anywhere with the help of the browser. It can execute various HTTP web servers simultaneously. It is considered an apt tool for creating small source code in lesser time. It has trustworthy scaffolding and a clear interface for developers to create the best applications.

Pyramid is a small, light weighted, open-source, Python web framework that is targeted towards creating small- and full-scale web apps with simplicity. It is a WSGI Python framework that has great documentation support and a heavily active community. There is a great deal of flexibility that it offers in selecting the different components like database layer, templating system, and plug-ins.

Thanks to its modular and flexible features, Pyramid is considered one of the fasted Python web frameworks. It is enriched with features and is highly mature in its approach. It can be used in a variety of applications like websites, web APIs etc. It has an extensive modular architecture and has testable components. Its URL generation component does not let the application break links.

WebPy is a popular Python framework that is simple and powerful. Since it lies in the public domain, it can be used for whatever purpose it is needed for. It is easy to read, small and best fit for web development. Processing of websites is faster and efficient here. WebPy is considered best if users want to add a dynamic element or develop an engrossing site from start with Python code.

It has good community support and extensive documentation. It is well maintained and hence liked by developers for its instant help. There is a role-based access control that is a key feature here and supports multiple international markets. It needs no establishment and no setting up procedure and hence is most attractive for novice developers. It helps developers in designing dynamic web content with Python.

CubicWeb is a popular, semantic web application framework, best fit for Python developers for designing effective web applications. It follows the semantic web principles and enhances reusability through component reusage and ensures efficacy of the entire solution. It is well-defined and focusses on good quality. It was created with a purpose to make it simple for developers while creation of RDF data that can be utilized in many ways.

CubicWeb comes with detailed documentation and good user support. Hence, creating Python-based apps is fast and easy for novice developers too. It is totally focussed on getting effective and quality rich results with a complete reusable angle. Its salient features empower users to garner more control over the visual display. It has certain important components like cubes, instances, data repository, web engine, data model (schema).

Falcon is a Python-based micro-framework that is ASGI/WSGI based and is used for creating mission-critical REST APIs, web APIs, application backends and microservices. It helps developers in building clear designs for HTTP and REST architectures. It is reliable, accurate and light weighted. There is not much dependency outside the standard library that keep the application surface smaller yet secure. There is huge community support with detailed documentation, blog posts, podcasts etc. to help novices master this framework.

Falcon is considered a fast framework for designing robust app backends and microservices. Many known organizations have been relying on it for its acceptability, performance, and stability. It encourages the REST style of architecture and complements more general Python framework as compared to its peers. There are several templates, add-ons, and packages that can be leveraged by developers. Falcon executes seamlessly on various web servers and platforms.

Tornado is a known, scalable, open-source Python framework that is now acquired by Facebook. It is a non-blocking web server and web app framework that is an asynchronous networking library tool. It is apt for creating highly concurrent application which have thousands of open connections. Unlike WSGI, it executes with only single thread per process. It is mainly aimed for high-performance apps with thousands of concurrent users.

Tornado is known for its performance excellence and stands tall in the list of liked frameworks by developers when it comes to high volume app creation. It supports restriction and interpretation with a superior performance. There is inbuilt support for user authentication and authorization. It is highly recommended for applications where there are several active connections being maintained.

Python Has a Bright Future….

Choosing the right Python framework is a tough task and highly critical too. Looking at the importance of Python in projects, having the correct framework is crucial. It depends upon a variety of parameters like the future components, budgeted cost, project deadlines, detailed analytics, size and scope of project, requirements, skilled expertise etc. Python development is sure to go a long way now and so will the Python frameworks that are associated with this popular language.

Ankit, Tech enthusiastic Business Development Manager at SPEC INDIA. He loves to write and share content related to the latest technology trends, software for business, comparison of tools and technologies, and more.