Artificial intelligence, better known as AI, is not the only technology that is receiving a lot of media and investor attention these days. Blockchain is also emerging as a technology in its own right separate from the highly publicized rise in the value of cryptocurrencies.

Proponents of blockchain claim that it will have a fundamental and revolutionary impact on all industries, changing the way we transact with each other. Blockchain will allow greater degrees of transparency, trust, and decentralized control where governments and businesses cannot own or manipulate data at will.

Surely AI will have some impact on blockchain and so will blockchain on AI. So, let us discuss “what are the ways in which AI can impact blockchain”, and “how blockchain will add value to AI?” Or maybe this is “all double the hype?”

What is Blockchain and Why is it Important?

In simple words, blockchain is a decentralized, distributed, and immutable transaction ledger that has elements of transparency, trust, verifiability, and “smart contracts” that provide a programmatic way to enforce transactions with trust and verifiability. And I am not just talking about financial transactions – these could be exchanges of information, chain of custody or authority for an item, contracts, and all kinds of valuable exchanges.

You must be wondering why is blockchain so important?

Blockchain is doing it so that we don’t have to trust an intermediary every time we are trying to achieve some kind of transaction of value between two parties. Intermediaries can introduce arbitrary decision making, inefficiency, potential fraud, costs, and loss of privacy.

Additionally, the lack of transparency and immutability results in criminals and mischief-makers causing problems without the visibility of the people they are impacting.

Blockchain promises to change all of this by making it nearly impossible to change any type of information put on the blockchain and removing any central authority or control over that information. In short, with blockchain whenever we want to facilitate a transaction between multiple parties and we want to do it in a reliable and immutable way without the use of an intermediary, blockchain presents a possible approach that we can use.

How Can Blockchain Benefit AI?

Not only can blockchains be used to share models and data, but blockchains can help play a role as a “master brain” in a shared way across multiple AI systems. If we can bring all these benefits of shared learning and blockchain and AI together, there is also the possibility to combine all these things that they can learn from their environment and then share that learning with all the AI ​​systems on the network.

An important benefit would be that no one owns it and there is no government control over the bot or shared brain. It could potentially be unbiased due to the vast amount of information coming from different areas and different angles. Another app tackles the explainable AI challenge. One of the biggest problems with deep learning is that there is no clear idea about which inputs result in which output and how that affected the entire sequence.

If anything goes wrong in a deep learning network, we don’t have a clear idea of ​​how to identify the problem. This is the problem that neural networks are in effect a “black box” without any real transparency or explicability. However, if we use blockchains, we can record how individual actions result in a final decision in an unreliable way, allowing us to go back and see where things went and then fix the problem.

The blockchain would be used to record events such as decisions and actions of autonomous vehicles, in a way that will not be changed later. This can also increase trust as the blockchain element is unbiased. It is also for storage and analysis, anyone can come in and see what happened.

Finally, artificial intelligence systems can be used to improve blockchains in general. Machine learning systems can keep an eye on what happens on the blockchain. It can look for patterns and anomalies in the types of data that are stored and the actions that are taken on a particular server.

Systems can look for normal behavior and flag what appears to be unusual. Artificial intelligence systems can help keep the blockchain more secure, more reliable, and more efficient. While the worlds of artificial intelligence and blockchain may be full of hype, there are real, tangible, and realistic ways that the two emerging technologies can be used in ways that benefit each other and deliver real results for those looking to implement them. technologies today in your environments.

Another intriguing area that blockchain can help is by providing a means by which we can make machine learning systems more explainable. One of the challenges with certain machine learning approaches and deep learning, in particular, is that they are something of a black box. 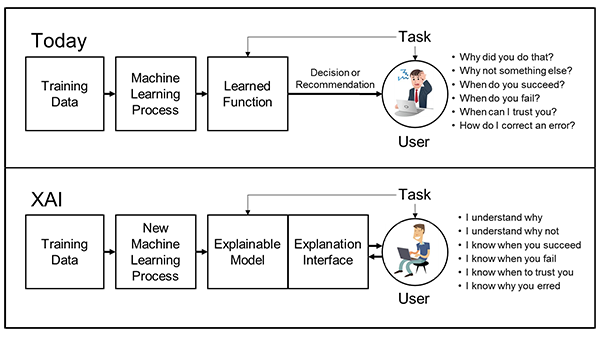 We do not know exactly why and how certain decisions are made in that approach and that can lead to certain problems. With blockchain, each step of decision making can be added to a chain that provides some visibility and immutability in decision making. While it is unclear exactly how this would work or how granular the blockchain can actually be in this situation, there is a possibility that value will be added here.

One of the biggest problems regarding blockchain is that it is not built for efficiency, not even necessarily on a very large scale. As blockchains grow in size, the systems dealing with them will have to consume increasing amounts of processing and storage power to cope with those chains. Some are looking to use ML approaches to find efficiencies and areas for optimization in blockchain technology.

Another thought is that you can hire AI developers and create AI-enabled cybersecurity systems to monitor the blockchain for unusual and possibly fraudulent behavior, in fact looking for outliers or “cybersecurity for Blockchain.” This idea is suitable for ML because much of the way ML works is by identifying and detecting patterns and also identifying outliers for those patterns.

Making Sure the Hype Doesn’t Get Out of Control

Many see AI as an area riddled with massive hype and media attention. Businesses are demanding all sorts of capabilities and benefits from AI that have yet to be realized. And if you just replace the word “AI” in the sentences above with the word “blockchain”, you can say the exact same thing.

So is it possible by combining these two things, we are simply doubling the hype?

Certainly, many people say that is the case. However, it could be equally likely that AI and blockchain individually offer value. And combined, they could provide even more value. Keeping a close eye on where blockchain is heading if it really helps deliver on the promise of better AI systems.

Artificial Intelligence (AI) has a market full of hype, with vendors, customers, and the media talking non-stop about AI capabilities around the world and their contributions individually.

Blockchain is also generally touted in the market, with technology providers and clients demanding all kinds of skills that may or may not be possible.

Can combining AI and blockchain get double the hype?

On the other hand, AI is implemented real, real value in many infinite ways that we talk about every day.

Similarly, blockchain is starting to show value in a variety of applications and businesses. So maybe the combination of AI and blockchain will also show double the combined power.

Where To Go Next?

As the new decade begins, the IT industry is expecting disruptive technologies to rule the world. AI and blockchain both are two such technologies and when used in the right ratio, the output can be a massive success.

If you are planning to invest in either of these technologies then here’s what you can do. Get in touch with a blockchain development company in India.

With this, we come towards the end of our blog. If you have any other queries or suggestions, feel free to comment below.

Till then, that’s all folks!

By Read Dive 3 days ago

By Read Dive 6 days ago

By Aman Khan 4 weeks ago